The legacy of Frank Mankiewicz, an iconic Washington, D.C. writer, political pundit and master communicator, lives on with the next generation of H+K team members through the Frank Mankiewicz U.S. Career Explorations Program. 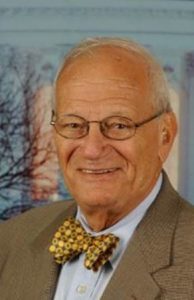 Frank, a legendary veteran of public affairs and strategic political communications, served as an executive at H+K for almost 30 years. He is remembered fondly as a trusted advisor and mentor by many.  Frank’s fascinating career spanned directing Peace Corps activities in Latin America, serving as president of National Public Radio, leading Sen. George McGovern’s unfulfilled presidential campaign against Nixon, and perhaps most notably, delivering the announcement of Sen. Robert F. Kennedy’s untimely death in his role as spokesman and campaign press aid.

At H+K, Frank was passionate and committed to getting to know each new employee and making it a priority to spend time mentoring junior staff, who were regaled with his sage advice and quick-witted sense of humor. It is because of Frank’s tendency to effortlessly facilitate new connections that the H+K Explorers program was named after him.

Modeled on H+K’s global Dave Robinson International Scholarship Program and part of H+K’s Inside benefits, the Frank Mankiewicz U.S. Career Explorations Program is designed to offer junior- to mid-level staff in the U.S. the opportunity to spend two to four weeks in an alternate U.S. office. This is a unique opportunity for H+K staff to expand their internal network outside of their home office, gain hands-on experience working with new clients and different teams, all while absorbing the individual culture, energy and leadership that makes each H+K office unique.

Now in its second year, graduates of the program have shared testimonials of their personal and professional growth by noting the changes that happen when pushed outside of one’s comfort zone. In 2017, four more Explorers from Chicago, Austin and Los Angeles will discover what it’s like to live and work in Washington, D.C., New York and Austin respectively.

While it can be scary to jump into the unknown and leave the comfort of home to work side by side with new and different colleagues, few of us get anywhere without taking chances and seizing opportunities. Frank would have been the first to tell us that.