Entering the second year of H+K Germany’s cooperation with Indeed – the #1 job site in the world – the client expressed its desire to build on the success of the ‘Job of the Match’ campaign and expand it both in terms of content quality and distribution, including paid social media support.

‘Job of the Match’ ran throughout the German Bundesliga season 2017/2018 and offered supporters of Eintracht Frankfurt unique insights into their favorite club. This was achieved by showcasing Eintracht employees beyond the players and coaches: during the first year, 10 editions presented the jobs of the greenkeeper, press spokesperson, stadium announcer and seven others. Even hardcore supporters of the club praised the campaign as one that offers real value to the fan community and which demonstrated Indeed’s will to go beyond what main sponsors of Bundesliga clubs usually do as part of their involvement.

The brief outlined that from a content perspective, the format should retain its focus on the professional world in relation to Eintracht Frankfurt but be accessible to new audiences. It should also put a twist to an established concept. To keep the original idea’s simplicity, H+K simply turned it around and created the ‘Job of the Fan’. Instead of an Eintracht employee presenting his job to a fan, a fan is given the opportunity to present his job to an Eintracht player. Fans apply via the sponsorship homepage and the entrant with the most interesting job wins.

The first ‘Job of the Fan’ was shot in November and placed Eintracht and Dutch national player Jonathan De Guzman in the hands of Marcus Brinkmann, a team leader with the fire department of the city of Frankfurt. During the ‘Job of the Fan’, De Guzman was fully equipped by the fire department, asked questions about the job and the training required to do it, extinguished a fire, etc. The resulting content was broken down into various clips, e.g. a 2-minute social media version, a long-form 7-minute version, a miniseries stylized as a comic, etc. 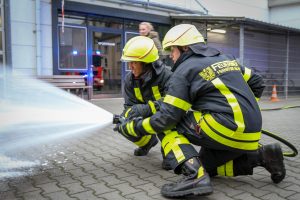 With each episode, the new format will showcase the variety of the modern professional world and entertain the viewers which seldom get the opportunity to see their idols perform ‘regular’ jobs. Parallel to upgrading the quality of the content, its distribution was also revised and further improved. With the start of the new Bundesliga season, H+K launched a dedicated sponsorship account on Instagram which quickly gained followers and helped to reach new audiences not present on Facebook and Twitter, which previously were the only social media channels served.

All of the videos are tailored in house to make most of them with the various distribution channels. While in terms of the paid social media budgets, each ‘Job of the Fan’ is supported by Facebook, Twitter and Instagram ad campaigns which are primarily aimed at a football audience as well as targeting audiences and segments that specific to the respective job. For the first ‘Job of the Fan’, for example, audiences interested in rescue services and the city of Frankfurt itself were targeted.

Overall, Job of the Fan received positive reviews among the target groups and also caused Eintracht players to engage with the content resulting in even more visibility for Indeed. Many content assets were also shared in Eintracht Frankfurt’s social media channels due to their relevance to the club and its community. The first episode already achieved an organic reach of more than 200,000, average engagement rate across all social media channels of more than 3% and almost 2,000 interactions.