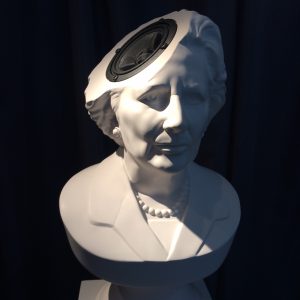 The robots are going back in their boxes, the VR headsets are being dusted down, and we sadly have to bid farewell to CES Asia for this year. The expo’s second visit to China has certainly been an extraordinary success, doubling in size following its debut. But after 3 days of high-fiving robots and dodging drones, what have we learned about the future of the tech industry in China?

In recent decades it has been fashionable to criticize Chinese companies for failing to innovate at the same pace as their Western equivalents. Yet if this year’s CES Asia expo tells one story, it is of the increasing growth of China’s tech start-up industry. Whilst the conference has grown impressively year-on-year, the presence of Chinese companies has outpaced it further, with more than one-third of floor space this year occupied by domestic companies (compared to one-fourth last year). Chinese start-ups are looking increasingly confident and creative, and the future for the country’s technology industry looks very bright indeed.

Pretty soon, everything is going to be a robot

Whilst low-flying drones and long-lines for VR demonstrations were a predictable (if welcome) sight, one of the surprise hits of the expo was Cowa, whose robot suitcase seemed to charm everyone it came into contact with. Whilst a travel case that follows you like a faithful dog might seem like a novelty, the application of cutting edge robotics technology in such a niche product hints at an important truth about the future – pretty soon every product is not only going to be connected to the internet, it is also going to be a semi-intelligent robot.

VR has the undoubted potential to shake up a number of industries, from entertainment to energy to medicine. However, the majority of exhibitors at CES Asia seemed to eschew its more adventurous applications in favor of its most obvious use: video gaming. Whilst this does make a certain amount of sense, particularly given the huge videogaming market in China, it is possible that some opportunities are currently being missed. Regardless, commercial appeal of videogaming VR will only help the technology’s development, hopefully leading for more diverse applications in the near future.

China could be leading a personal transport revolution

After promising beginnings in the West, hoverboards have recently struggled for legitimacy in many markets. Often compared unfavorably with the brief fad for segways a decade earlier, some industry commentator have written them off entirely. Yet despite this, it was quite literally impossible to miss the hoverboards, gyroscopes, scooters and electric scooters whizzing their way around CES Asia.

The headlines might belong to the myriad of companies manufacturing drones and VR equipment, but that doesn’t quite tell the whole story CES Asia. Hidden the more zeitgeist-y fare were some truly esoteric creations. From a robotic twerking simulator (so anatomically correct that a picture would be deemed NSFW) to audio speakers carved out of the heads of world leaders, you certainly couldn’t accuse exhibitors at CES Asia of lacking creativity.