Where AI is gaining greater momentum is in the enterprise level. Today AI is deployed in many applications such as the use of AI to combat cybercrime, the use of chatbots to provide better service to consumers, the use of AI to improve the “customer experience” or the use of AI on Netflix, Spotify and Amazon (just to mention a few) to further customize the service and anticipate the needs and expectations of the consumer. Such growth in enterprise applications and diversity in the way AI can help companies has prompted governments to invest more in AI and create the right environment for future job seekers to learn the skills, the aptitudes, the applications and best practice. The most recent example of this was announced a few days ago when the UK government issued a £18.5 million public investment to boost diversity in AI tech roles and innovation in online training for adults.

So where is AI being deployed in the enterprise and why? It is well understood that AI will have the greatest impact on job functions where a majority of time is spent collecting and making sense of data. At the top of that list are obviously finance and insurance, as well as healthcare and also retail. When it comes to which applications of artificial intelligence are being used most by firms in 2019, surveys have shown that chatbots top the list with 26 percent of firms saying they use this technology which we’re now calling “conversational artificial intelligence” or “conversational AI.”

But where the real strides are now being made is in the area of insight driven decision-making which AI can facilitate in real time. A good example of this is Spacemaker, a Norway-based start-up that’s created AI software to help property developers and architects make better design decisions. Described as the world’s first AI-assisted design and construction simulation software for the property development sector, Spacemaker claims to enable property development professionals, such as real estate developers, architects, and urban planners, to quickly generate and evaluate the optimal environmental design for any multi-building residential development.

That’s just one example of how companies have entered a new era ruled by data, and what was once the realm of science fiction can now be cracked using AI and business intelligence to gain valuable intel. Companies can now use machine algorithms to identify trends and insights in vast reams of data and make faster decisions that potentially position them to be competitive in real-time. Here are two really good examples of this.

Darktrace has developed the Enterprise Immune System which is an advanced machine learning technology for cyber defense. Inspired by the self-learning intelligence of the human immune system, this new class of technology has enabled a fundamental shift in the way organizations defend themselves, amid a new era of sophisticated and pervasive cyber-threats. The human immune system is incredibly complex and continually adapts to new forms of threats, such as viral DNA that constantly mutates. It works by learning about what is normal for the body, identifying and neutralizing outliers that do not fit that evolving pattern of normality. Darktrace applies the same logic to cloud, enterprise, and industrial environments. Powered by machine learning and AI algorithms, Enterprise Immune System technology iteratively learns a unique ‘pattern of life’ (‘self’) for every device and user on a network and correlates these insights in order to spot and stop emerging threats that would otherwise go unnoticed. Like the human immune system, the Enterprise Immune System does not require previous experience of a threat or pattern of activity in order to understand that it is potentially threatening. It works automatically, without prior knowledge or signatures, detecting and fighting back against subtle, stealthy attacks inside the network — in real time.

The increasing prevalence of sensors in machinery, vehicles, production plants, and other hard equipment spaces means physical equipment can be digitized and be monitored by artificial intelligence. The Internet of Things can encompass commercial trucks, trains, oil rigs, and cargo ships all of which can all be digitized, monitored, and assessed via networks. Oil and gas, aviation, for example, have been using General Electric’s Predix operating system, which powers industrial apps to process the historic performance data of equipment. It can take vast amounts of information recorded over time and use AI to develop its forecasts. This can be used to discern a variety of operational outcomes such as when machinery might fail.

The short story is that AI is genuinely gathering momentum in the enterprise, and we are already seeing examples of how its potential in business can be disruptive. Through either automation or augmentation, AI will undeniable change work as we know it much like the internet 20 years ago. Though there is a genuine sentiment that AI will transform industries, the actual applications and projects that will deliver greatest value is mostly unknown, but it is so encouraging to see companies embrace this technology and put it to such good use.

David Vindel, EMEA Practice Leader, Technology at Hill & Knowlton Strategies will be chairing a debate for global companies in Spain, titled “using AI in search of the best customer experience” on June 13, 2019 in Madrid, Spain. 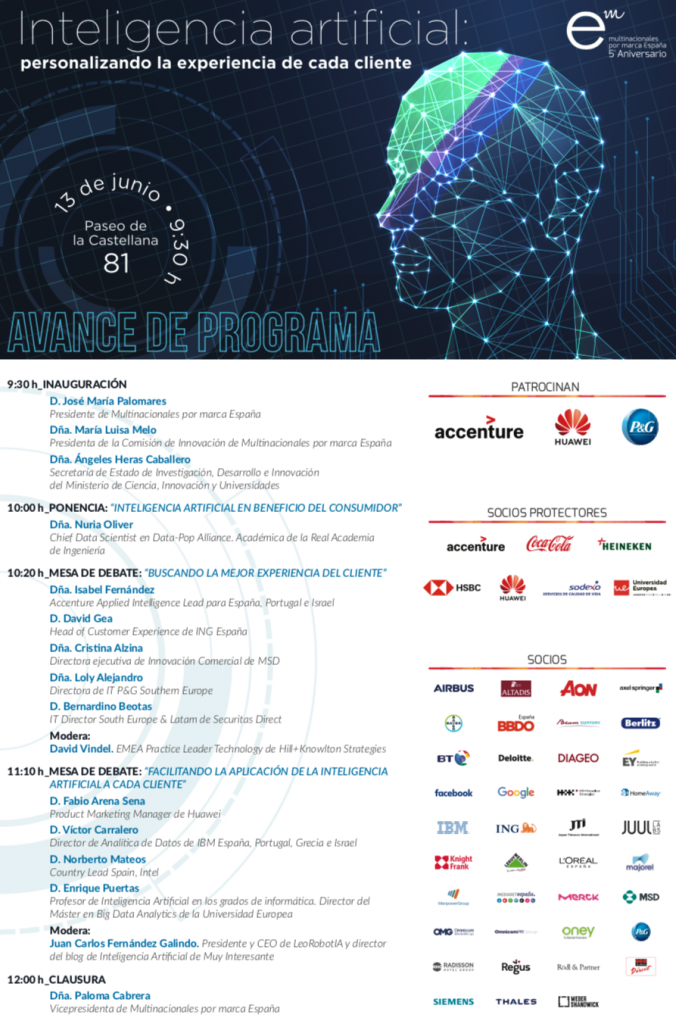