The campaign was just recognized with multiple notable awards, including a Latin America PR Excellence Award for Storytelling a Premios, a WPPed Cream Award 2018 in the category Public Relations – Corporate and Public Affairs, and two IAB MIXX awards.

Around the globe, cultures have their own definition of beauty –whether, American, African, Asian, Latino and so forth… With a country as diverse and rich in culture as Mexico, it came to a surprise that beauty was perceived as being one skin color. Mexicans with brown skin, or ‘morenos’ –which make up 80% of Mexico’s population– have become marginalized in their own country. In many ways, this can be attributed to advertising which further reinforces the issue by promoting “western” beauty, rather than their idea of segmented beauty, making up just 20% of the population.

In partnership with Hill+Knowlton Strategies, MediaCom and J. Walter Thompson, Cerveza Victoria served up some serious national pride in Mexico reminding Mexicans to feel proud of their heritage, bringing attention to this injustice, sharing a powerful message by way of two controversial social videos with the same message: NOT ALL BEAUTY IS WHITE, through the campaign #LoChingónEstáAquí.

“As a team, our challenge was to develop a robust storyline to bring visibility to the brand’s stance on discrimination: reaffirm that #LoChingónEstáAquí – it’s in every Mexican, no matter the color of their skin, their social or geographical situation. Through a series of videos and disruptive content, we were able to viralize the campaign and open the lines of conversation surrounding the topic of racism and discrimination that exists in all sectors and all levels of society, including advertising. Beyond a campaign, the brand sought to create a movement were Mexican diversity would be recognized and celebrated with pride.” – Fleur Grillon, Vice President Consumer Communications, H+K Strategies Mexico.

How it came to life
The first unbranded video showed a mobile phone capturing a light-skinned actress while she complained to a director for asking her to stand behind a brown-skinned actress, as part of a commercial shoot. This depicted the reality in most Mexican sets. A small snapshot of everyday prejudices seen in Mexico. This kind of “hidden camera” scenario, capturing deplorable behavior became widespread, and in turn gave more authenticity to our campaign.

After just 19 hours, with outrage at an all-time-high, the brand released a second video (this time branded) on Cerveza Victoria’s social channels and distributed a press release, showing the actresses coming together and explaining “not all beauty is white – advertising made you believe that”. The second video, demonstrated that racial discrimination goes against the core notion of who Mexicans are as a country. As a result, it became the most-shared video of the year, confronting Mexicans for their behavior. Media supported the campaign organically, giving a powerful push to the brand’s statement. 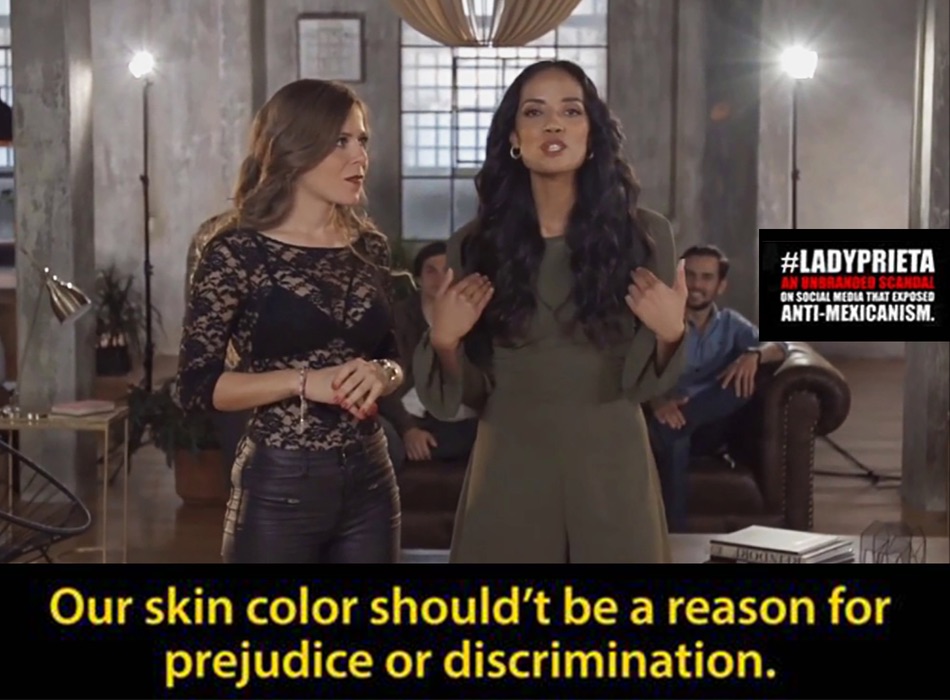 The first video generated 100% negative media coverage focused on racism. With the second video, the media conversation turned 84% positive. During the first 42 hrs., this video reached 5.4MM views, becoming the most-shared video in Mexico in 2017 with 234 pieces of top-tier press coverage, generating an ad value of over $3M USD and earning 365.3 MM media impressions. These results were achieved organically, with no paid support. The final stage of the campaign, a press conference, increased the media’s positive sentiment to 96%. More than 10MM Mexicans used the campaign hashtag and mentioned the brand, becoming a top trending topic on Twitter. Cerveza Victoria boosted its share of voice by 40% –10% above target– and achieved its best-ever monthly sales.